William Blake is a leading visionary of the Romantic Age who explored religion, philosophy, and politics. He was known for his engravings and paintings, as well as his poetry.

Here are some interesting facts that created an effect on his way of writing:

To the Evening Star

Thou fair-hair’d angel of the evening,
Now, whilst the sun rests on the mountains, light
Thy bright torch of love; thy radiant crown
Put on, and smile upon our evening bed!
Smile on our loves, and while thou drawest the
Blue curtains of the sky, scatter thy silver dew
On every flower that shuts its sweet eyes
In timely sleep. Let thy west wind sleep on
The lake; speak silence with thy glimmering eyes,
And wash the dusk with silver. Soon, full soon,
Dost thou withdraw; then the wolf rages wide,
And then the lion glares through the dun forest:
The fleeces of our flock are cover’d with
Thy sacred dew: protect them with thin influence!

Then, we watch the following presentation to get a deeper understanding of the poem:  Click here.

In my opinion, in this poem the Writer tries to advice us, the reader, to take care of the “night” and its evils. He personifies the brightest star in the sky, the one who brings protection. 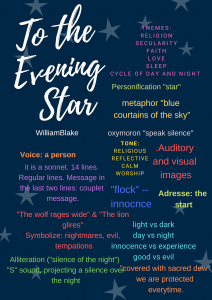